Does your library have basic broadband connection speed? Better check it again!

Judy Posted in Technology — No Comments ↓ 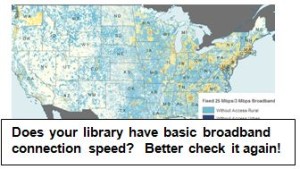 A few months ago, in our article about Internet connection speeds, we noted that 4 Mbps was the FCC’s definition of “basic broadband,” the speed adequate for services like video, voice and gaming over the Internet.

Not anymore. In January, the FCC increased the definition of broadband to 25 Mbps. The previous benchmark (4 Mbps download and 1 Mbps upload), which had been in place since 2010, was ruled “dated and inadequate.” The new standard for broadband-quality speed is 25 Mbps download and 3 Mbps upload.

The FCC’s 2015 Broadband Progress Report found that 17% of Americans overall lack access to broadband, using the updated definition. In rural America about 53% lack access, compared to about 8% in urban areas. (About 20% of rural Americans don’t even have Internet connection speeds meeting the old broadband standard of 4 Mbps.) See the FCC’s broadband deployment map here.

You can test your Internet connection speed at a number of sites – one good choice is Ookla’s http://www.speedtest.net/ .

Judy is a technology consultant for public libraries. She blogs at ElephantInTheLibrary.com.